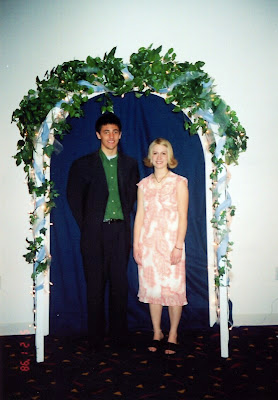 Scott drove all the way here from Rochester, MN to be my date at my highschool's senior banquet. i was a junior, he was a senior. My hair is hideous! 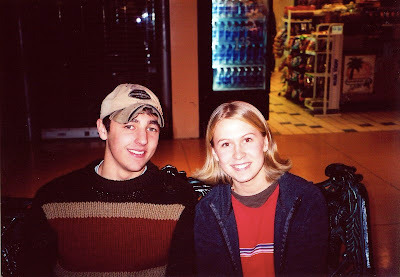 The above picture is the next time we saw each other after our little date in the Daily Grind in November 2001. This picture is January 2002. 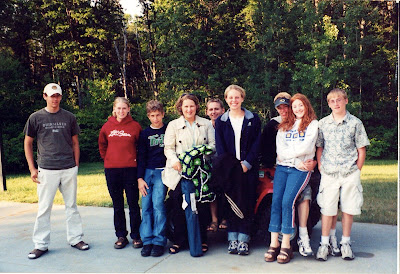 This picture is july 4, 2002. Scott is standing like a foot away from me. We were still a little shy and awkward. 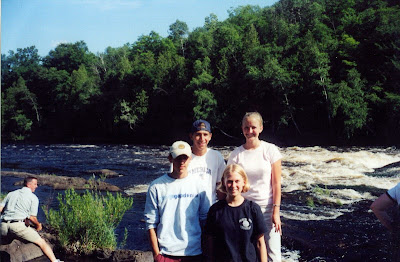 This is still summer of 2002 at leadership camp. Scott and I are in the front, and Jennie Borchardt is behind me. We really got to know each other that summer. 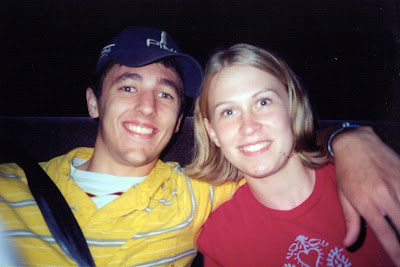 The above pic was my first time at Scott's house in Rochester. We had just gone golfing with Scott's sister Jodi and her husband Ryan. 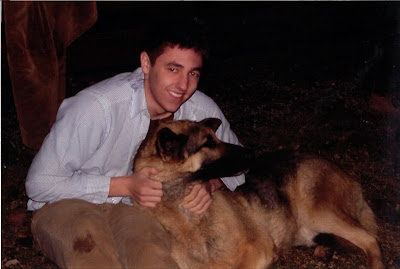 This was Scott's favorite dog, Duke. Someday we'd like to get a German Shepherd.
Posted by brokeontwizzlers at 11:16 AM 3 comments: 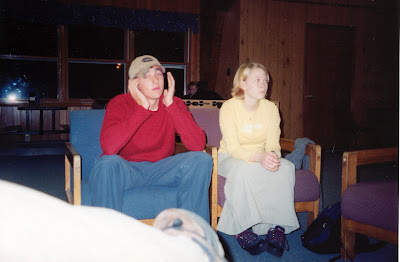 This picture is the very first picture of Scott and I together, although i know we have a better one somewhere that we're both smiling in and looking at the camera actually. It was just after what you may call our first date in the Daily Grind. The date was November 13, 2001. It was our second time seeing each other. We met the previous summer at camp. Yes, we are a camp relationship that actually worked. I was 16, and he was 17. I was in volleyball camp, he was in soccer camp. Jodi, Scott's sister was the one that introduced us (thank you Jodi!). I remember shaking his hand, and though the sun was shining directly into my eyes I noticed his beautiful blue eyes. He was so gentle and sweet, I couldn't help but like him. That was basically all the communication we had that week. But two weeks later I received an e-mail from him. It was dated August 9th. I still have that special e-mail to this day. And from there we kept communication by e-mail. I remember longing to get the next e-mail from him. And then we got instant messenger, and we would chat for hours late into the night. So, the picture above was the next time I saw him, when he came with a group of prospective students from his highschool. I'll let the diary excerpt below tell the story:

11-13-01
It is already 12:00am but I cannot go to rest w/out writing a word of my wonderful day. First, I'll explain yesterday. Yesterday, Scott Mohler came w/ his youth group to visit Northland as a college. I saw him and Jodi at the Dining Hall and went to say hi. I was shaking and not much was said besides, "How are you?" and so forth. I went to sit where I was eatin and he never stopped by. I didn't know what to do b/c I couldn't let his visit go by w/o doing anything w/him. So I went to the rechall and saw him there. I asked him if he wanted to do somethin the next day. He said "yeah." and I called Jodi and set a time w/ her and met them at the coffee shop. He was sitting alone on a high table. It was so exciting. We then got a drink. We talked alone for a while and then Jodi came up. We talked a little more and then decided to go to the rest of the basketball game. There, Jodi bought some of us pom poms to cheer w/. Me and Scott sat together and waved our pom poms. It was really quite fun. Then after we tried to decide what to do and after swinging w/ the pom poms to hit the ping pong we went to the rechall to play fooseball. I played w/Scott for a while and then at 10:00 i had to call my mom. I had to go home at 10:30 and so we all just sat around and kind of talked. But thankfully I got a picture of us two together. Then i left as he gave me the pom pom. I only wish that this evening could last forever.

As you can tell, i was the outgoing one in the relationship, and Scott was kind of shy. I always tease Scott about how if it weren't for me being so outgoing that night, we wouldn't be together. But, actually it's because of him that we stayed together because of all the special things he did to win my heart.
Posted by brokeontwizzlers at 6:23 PM 6 comments:

brokeontwizzlers
I'm a wife to Scott Daniel Mohler and Mommy to Lucy Ellen Mohler. We recently moved to Forest Lake, Minnesota where we attend Grace Church. We are currently unemployed and living in my brother's basement. Trusting the Lord for a job in due time.